The Barber of Seville

“Just go in there and take your dress off”.  The shock must have shown on my face because the three women sitting at the sinks having their hair washed all laughed.  But it’s not what you expect, is it, when you walk into a hairdressers?  “Only if you want to” the receptionist soothed hurriedly.

I’d been nervous about going to a new hairdressers anyway, and especially a Spanish one where my grasp of the language might not be advanced enough to explain what I wanted – this was not a good start!  Since I was wearing very little underneath my new summer dress, I opted to keep it on and wear the proffered robe on top of it.

Things improved as I found Maribel, the co-founder of BRN Concepto who was doing my highlights, reassuringly beautiful with fabulous hair herself.  She was also lovely and patient with my poor Spanish so I got two hours of enjoyable Spanish practice chatting to her as she worked. 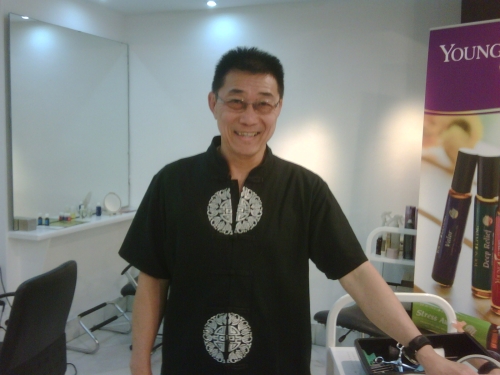 And then there was the wonderful Jeff.  Originally from Singapore, Jeff had been to an American university and lived on the west coast for some years before coming to live in Seville with his Spanish wife, so his English is fluent.  He’s the resident cook (yes, this hairdressers provides delicious snacks too).  He’s also a fountain of knowledge and an artist to boot – he showed me photographs of some of his truly beautiful paintings.

It’s an Aveda salon and very smart, with all the latest gizmos, such as the robotic-looking colour accelerator.  While having the highlights removed and my hair washed I enjoyed a wonderful massage chair and was treated to home-made pink lemonade and entertaining stories courtesy of Jeff.  Heaven!

Then it was time for the cut and the eccentricities returned with the other co-founder of the salon and chief cutter, Bruno.  Fortunately, by this stage my confidence and good humour had both reached very high levels, thanks to the service so far.  Bruno began working fast, grabbing handfuls of hair and chopping at it viciously.  Then he spotted some friends outside, waved wildly and dropped the great chunk of long wet hair he was working on slap into my face as he dashed outside to greet them.  When he returned his mobile phone rang, so he answered it and chatted with it tucked under his chin while he continued his work…  He got me to stand up and did most of the cutting in that position, in what seemed like a reckless freehand fashion – zooming the scissors through my hair without guiding comb.

“I am the best hairdresser in the world” he announced modestly, as he dried my hair.  “Look how sexy this is.  British hairdressers are very very good technically, but they have no flair” he assured me.  Well, I have no complaints.  It cost almost as much as my brilliant hairdresser at Trevor Sorbie in Brighton – but I was happy, not to say relieved, with the results.

The finished product (shame my eyes are closed…)