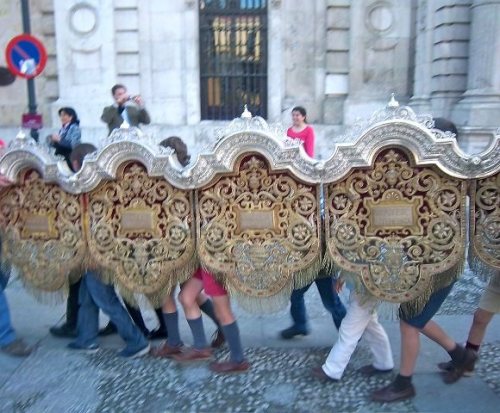 Just one week to go and everywhere in Seville preparations are being made for the biggest religious festival of the year, Semana Santa.  Next Sunday – Palm Sunday (Domingo de Ramos) – kicks off a week of highly theatrical parades through the streets, in a mixture of devotion and partying that only the Spaniards can pull off.

Seville is renowned for having the most spectacular Holy Week celebrations anywhere in the world.  Each church in Seville has its own brotherhood (hermandad) of laymen, who take part in processions wearing hooded robes reminiscent of the Ku Klux Klan, and carrying floats bearing life-size effigies of Christ on the cross and the Virgin Mary grieving.  Between Palm Sunday and Good Friday, 58 processions of up to 2800 penitents each, take place night and day, watched by crowds of close to a million people.

Costaleros in training for Semana Santa

The staggeringly heavy floats (or pasos), laden with church silver, statues, flowers and candles, are carried above the heads of dozens of heavily sweating men, the ‘costaleros’.  During Semana Santa, the costaleros will be hidden beneath the rich fabric that skirts the base of the float like an altar cloth, but during the weeks beforehand, they can be seen practising, unadorned in the streets.  The biggest guys get this job, and it is not a pretty sight!  Bellies hanging out of vests, trouser legs rolled up and protective fabric wrapped around their heads like turbans, they are packed closely together to maximise the lifting power. 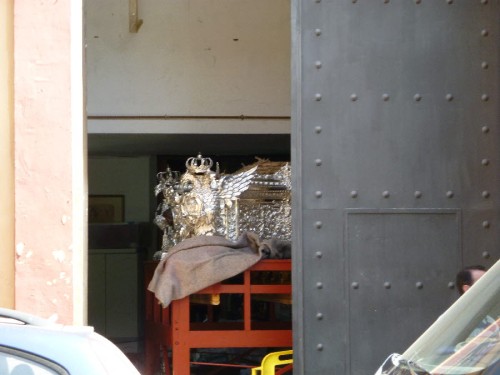 Church silver coming out to be polished

For weeks, young people have been sitting in church doorways, polishing the huge and intricate silver pieces that form part of pasos, and last weekend the brotherhoods began to assemble the huge floats.  I was lucky enough to see this happening at the chapel of the ‘Estudiantes’ (students) brotherhood, allied to the University of Seville.  They make a lovely family occasion of it, inviting the youngest child in the families of brotherhood members along to help, followed by an afternoon tea. 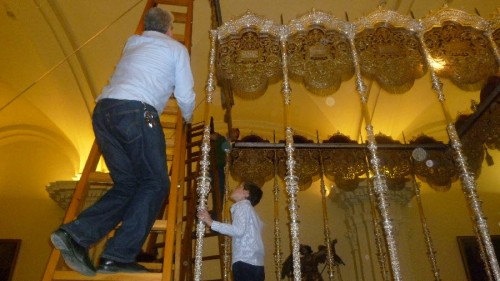 It’s all pretty chaotic inside the small chapel.  As adults construct the float, which reaches almost to the roof, dozens of small children stand underneath in place of the costaleros, enclosed like battery hens in a cage.  The float is temporarily held up on supermarket trolley type wheels and is regularly moved to aid assembly in the small space, which results in all the little kids stumbling around underneath – quite alarming to watch for a health and safety conscious Brit..!

Children 'helping' in the construction...

I do admire the way Spanish people involve their children in everything though – all of the families’ youngest had been invited by personally-addressed letter to help with the preparations, and they clearly love being involved.  It may also help explain why the tradition has carried on unchanged over centuries, as each new generation takes ownership from an early age and children even play at Semana Santa, looking forward to being old enough to join the grown-up parades.